Keeping IT equipment at the right temperature and humidity is critical to a smooth and reliable operation.

The Sheffield Data Centre was designed with "hot aisle containment" and a chilled fresh air supply system. Fresh air is brought into the plant room above the server room and is chilled before being pumped downstairs. Waste air from racks is contained and extracted before it can mix with and contaminate the chilled air.

No energy is wasted trying to re-chill waste air from servers, which can be as high as 35 degrees centigrade!

In November 2009 we installed a building-wide Evaporative Cooler which replaced the conventional air conditioning system. This has been upgraded as required for additional demand. 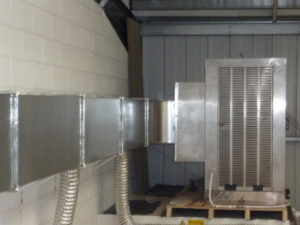 Each cooler delivers up to 18,000 cubic metres of chilled air per hour into the server room. Capable of chilling air by up to 12C depending on the outside temperature.

Using fresh air from outside the building the system regulates humidity between 50% - 60% and the temperature to under 23 degrees. Manual controls allow staff to give the system a boost when required on hot summer days.

One final benefit to the Evaporative Cooling / fresh air system, is during the colder months of the year (under 10 degrees outdoors), the water chiller can be turned off, giving us free cooling based on 100% fresh air!

​​Planned from when the Sheffield Data Centre was still on paper - hot aisle containment on the first block of racks was completed February 2010, just after the go-live of the new Evaporative Cooler. 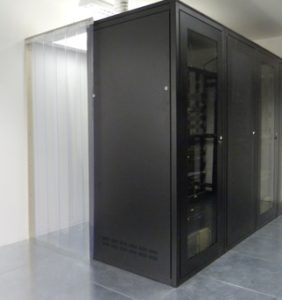 We were designing hot aisle containment before most! The results were measurable immediately! The computer room runs cooler, the hot air pumps use less energy, the chilled air isn`t contaminated with hot air causing an imbalance, and it also looks cool!

Hot exhaust air is contained within the space between the back of racks and pumped out of the room before it has a chance to mix with the chilled air. Hot aisle containment is now standard on all aisle. All servers now have their hot air extracted and totally removed from the building.