What is a VPS? HA Hosting Guide

What is a Virtual Private Server?

A virtual private server (VPS) is a server that is virtual rather than physical. Think of it like a digital server that has no physical components.

These are then kept on a physical server. The biggest benefit is that multiple virtual servers can be kept on one physical server. This means you can save on physical space and money as they cost much less! These work almost the same as a regular server.

Virtualisation was invented by companies that were trying to be more efficient with resources. Because it was common for servers to have spare resources for busy periods and maybe future growth.

However, because of this, servers could only be using 10-20% of their resources.

To combat this, virtual servers were created.

Multiple servers could be kept on a single physical hardware server. This resulted in servers being able to use up to 80% of their physical resources. And this is much more cost-effective and efficient.

Think if you had the option to choose between 5 Virtual Servers or 5 physical servers (which won’t get fully utilised). Which do you think is the best value for money? We’ll give you a clue – it’s not physical servers 😉

Physical servers were like driving an empty bus around. Whereas virtualisation is more driving like a bus full of passengers. It utilises more of the potential. 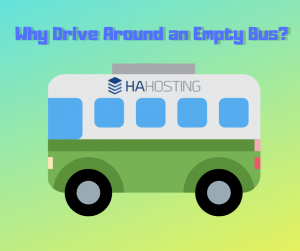 Virtual servers work by using Hypervisor, something that acts as a translator between the physical hardware and the virtual ‘hardware’. Each virtual server only needs to talk to the hypervisor (not the hundreds of types of hardware). This means that the Virtual Servers are portable between physical servers.

Why Use a VPS?

The main benefits of using a VPS are:

Want to Find Out More?

If you want to learn more about our VPS, you can go to our VPS page here.